We congratulation Dixon Hayes on his Life Membership presentation on 27th April. Dicko was not able to be at the 2015 Presentation Night to receive the honour then so we are making a bit of a fuss about him now, even though he hates the fuss. Dicko is the type of bloke that makes clubs like the Raiders tick. He is a no fuss, get the job done bloke and that’s just how he how played his football in his 120 odd Raider games. Over a decade on various committees, cleaning up club rooms, serving behind the ball, end of season trips….he is a Raider through and through. We congratulate Dicko on becoming the 13th Life Member of the Peninsula Raiders Football Club. 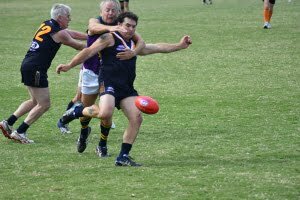