Preseason training began on Wednesday night the 4th of November 2015 at Mace Oval in Mt Martha. There were a lot of regulars as well as a few new guys.

The coaching appointments for the 2016 season were made prior to preseason training commencing. Warwick Graham was reappointed as Supers coach. The only applicant for the Over 45’s/Legends was Brendan Anderson so he was also appointed. We advertised the Masters/Reserves position within the club and received 4 applicants. The Executive committee drew up criteria that the applicants would be required to fulfil to be successful in securing the position.. After interviewing each applicant Craig Smith was appointed to the Masters/Reserves coaching position. He comes to the club with senior coaching experience on the Mornington Peninsula even though he has not been involved with Superules football previously. Just before Christmas Dish withdrew as Over 45’s coach due to work commitments. Chris Dynes put his hand up for the vacant position and was appointed.

The South Division was amended for 2016 with Dingley going to Premier Div and Melbourne dropping back to South. Box Hill Nth came in from Nth Div and St Kevin’s was a new club. This meant a 10 team Sth Div with: Raiders, Cranbourne, Parkdale, Mordialloc, Bayside, Melbourne, Narre Warren, Carrum, St Kevin’s & Box Hill Nth. In the Reserves Waverley played as Res for Narre Warren and another new team Doveton Eagles played as Res for St Kevin’s. The Season was reduced to 9 games for Supers and Reserves. The Over 45’s had 8 games and a bye in Rd9. The Over 45’s comp was combined into 1 Div. We played Melbourne, Craigieburn, Chirnside Park, Williamstown, Nthrn Dist, Brunswick Old Scotch and Bayside. This meant that the club had 5 home games as triple headers and 4 away games. Supers and Masters play away games together. The Over 45’s have 3 solo away games and we have 1 away triple header against Bayside in Rd8.

The League changed the way that Match Paperwork was to be submitted in 2016. All paperwork had to be scanned by the home team and emailed to the league.

Preseason resumed in the New Year on the 20th of Jan. The MPSC relocated us to Dallas Brooks Park due to the poor condition of Mace Oval. New players continued to appear at training in good numbers.

We played a couple of practice games on the 20th of March at Dallas Brooks Park against Melbourne. We played a Supers game and a Reserves/45’s combined game.

The Committee decided to purchase “Clash” jumpers for the club this year. We sourced a new supplier and had a sample made. The “Grey” designed was approved and an order for 3 new sets of jumpers placed. We were able to secure 3 Sponsors who paid for 1 set of jumpers each. Supers: Bricher, Reserves: Just Business Brokers and Over 45’s: BROO.

The Raiders were well represented at the Easter Carnival at Pambula again and also won the “Tug Of War contest for the 3rd year in a row.

Rd1 was played at home against Melbourne, Supers and Reserves won but Over 45’s lost. Peter Troup played his 150th game.

The New Clash Jumpers were ready just prior to Rd2 away games. It was decided to wear them in this round. We will probably wear them as Away jumpers and have them ready as clash jumpers as needed.

Rd2 was an away round. The Over 45’s played Craigieburn at Craigieburn but lost. This game was the 550th game played by the Raiders. The Supers and Reserves both had wins at Carrum against the Cowboys. The Reserves game was the 200th game by the Masters/Reserves for the Club.

We had our Reverse Draw on the 6th of May which was a successful night helping to raise funds for the club.

Rd3 was another home round. Ash Ackehurst played his 150th game in the over 45’s against Chirnside Park but we were unable to secure a win. Supers and Masters kept on their winning way against 2 new teams to AFL Masters Vic Metro. The Reserves beat Doveton Eagles and Supers beat St Kevin’s.

Rd4 was the 2nd home round in a row. The Over 45’s played Williamstown for the first time. They had been winning by huge margins but we played our best team game so far. We lost by 15pts in a hard fought low scoring game. The Supers and Reserves played Box Hill Nth and both won again. The Reserves by around 70 pts and the Supers narrowly by 5pts. It was their 3rd win by less than 10pts.

We had another Poker Night on the 24th of June. It was another successful fundraising event for the club.

After winning their first 4 games the Reserves had drop in form losing the next 3 games to slip out of the 4 with 2 rounds remaining. The Supers fared a little better but had 2 losses and 5 wins with 2 games to play before finals. Warwick Graham had to go overseas before Rd7 so Duane Annable stood in as Supers coach for that game. Grant Barran kicked his 100th goal for the club against Parkdale in Rd7. He was the 5th Raider to kick 100 goals. Chris Dynes played his 100th game for the club in Rd8 in the Over 45’s.

The Over 45’s started the season pretty well but were winless after 4 round. The first win came in Rd5 against Northern Districts. They then went on to win 3 of the last 4 rounds to finish the season in 6th place on the ladder out of 11 teams.

The Reserves ended the season in 5th position on the ladder just missing out on finals. They had to win the last game of the season to slip into the 4 but lost to Waverley by 2 goals. The Supers finished in 3rd place on the ladder to qualify for finals football for the 11th time in 21 seasons. They lost 2 games only to both top teams, Cranbourne and Parkdale.

The Best and Fairest Vote Count was held at the clubrooms on the 17th of August after training. The Over 45’s B&F was won by Ross Sanders with Ross Twyford Runner Up. Peter Vaughan won the Reserves award with Troy Arnott as Runner Up. It was a close run count in the Reserves with the top 7 places separated by 6 votes. Matt Jacobs won the Supers Best and Fairest for the 3rd season in a row with Chris McLean in 2nd place.

The Supers played Cranbourne in a Semi Final at Mordialloc. They had a near full strength team. They started the game in great style and led by 18pts at ¼ time. Cranbourne closed the gap in the second ¼ but the Raiders held onto a 4 point ½ time lead. We had a player given a Yellow card early in the 3rd ¼ which meant we could not replace him playing most of the second ½ with 17 players on the ground. After an even 3rd ¼ we still held a 4point lead. Trevor Mayne we stretchered of in the last ¼ with a neck injury. We played a good brand of football but were overwhelmed in the last ¼ to go down by 14 points. Parkdale ended up winning both Reserves and Supers Grand Finals.

The 2016 Club Presentation Night was held in “The Barn” at the Briar’s in Mt Martha. Kevin Deason won the Best Clubman Award. Gabe Mauerhofer and Peter Vaughan were Awarded Life Membership. 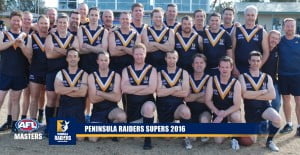 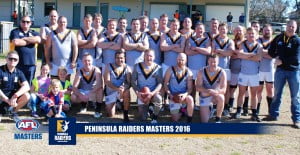 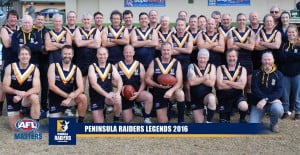